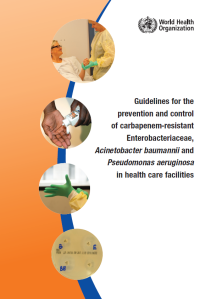 WHO have just released some guidelines for the prevention and control of carbapenem-resistant Enterobacteriaceae, Acinetobacter baumannii, and Pseudomonas aerugionsa. This guideline builds on the excellent WHO core components for IPC guidelines.

END_OF_DOCUMENT_TOKEN_TO_BE_REPLACED

Some fascinating modelling from the CDC Vital Signs programme suggests that a co-ordinated, multi-facilitiy approach will be much more effective than each hospital doing its own prevention interventions.

The team first estimated the burden of key infections in the US: CRE, multi-resistant  P. aeruginosa, invasive MRSA and CDI combined were responsible for 310,000 infections in 2011, which would increase 10% to 340,000 over 5 years. However, with an ‘aggressive’ national intervention, this could be reduced to below 200,000 by 2019. It would be a huge undertaking to implement and co-ordinate a national campaign in the US, where there is so much heterogeneity in the way that hospitals are structured and funded. But if anybody can do it, the CDC can!

END_OF_DOCUMENT_TOKEN_TO_BE_REPLACED

I was privileged to be asked to speak at the inaugural Healthcare Infection Society Middle East Summit in Dubai this week on ‘European approaches to MDR-GNR prevention and control’. You can download my slides here.

I began with a (probably too lengthy) preamble outlining some overall points:

END_OF_DOCUMENT_TOKEN_TO_BE_REPLACED

I was hoping that the ECCMID 2014 session on ‘Outbreaks of MDR Gram-negative bacteria: what works and what does not work?’ would bring some answers from large, controlled studies to improve the evidence base for MDR-GNR control. I’m sorry to report that most of what was presented only served to highlight the limitations of the evidence base! There’s a bit of a Catch 22 here: in most settings, the problem lies in outbreaks, but the answers lie in large, adequately controlled cluster randomized studies in endemic settings.

Dr Evelina Tacconnelli gave a thoughtful talk comparing the various international guidelines for MDR-GNR, reflecting on the recently published ESCMID version. The subject is broad, specifically in terms of which MDR-GNR, and in which setting. Guidelines for CRE in a general hospital population would look quite different to guidelines for CRAB in the ICU. Dr Tacconnelli focused on the areas of controvosy: isolation for ESBL carriers, how to prioritise limited side rooms (see useful ‘Lewisham’ isolation prioritization tool in Appendix 6 of these Irish guildelines), selective digestive decontamination, and the need for bundles. Finally, Dr Tacconnelli referenced a neat model for the effectiveness of various infection control interventions for controlling the spread CRKP. This is a clever study, and probably useful, but much like Berta (showing my age), incorrect inputs result in meaningless (or worse, misleading) outputs.

Dr Anna-Pelagia Magiarakos discussed some of the challenges of implementing guidelines, reminiscent of Dr Evonne Curren’s recent talk on a similar subject. One important point is to have some guidelines to implement! Countries lacking guidelines for the control of MDR-GNR tend to have higher rates (ECDC and PROHIBIT data). Once you have some guidelines, barriers to implementation need to be overcome: time, culture, resources, lack of understanding or belief that they will work, competence, habit, routines and “ivory tower” guidelines written by those detacted from the coal-face, to name but a few!

So are we any closer to knowing what works to control MDR-GNR following ECCMID 2014? Bundles are more effective than single interventions, but we still don’t know which elements of the bundle are most important, and this will vary by pathogen and setting. We need more studies like the commendable but complex MOSAR Lancet ID study.

You can view some other ‘Perspectives from ECCMID’ here.

During Alexander Fleming’s Nobel Lecture on December 11th 1945 he said ‘It is not difficult to make microbes resistant to penicllin in the laboratory by exposing them to concentrations not sufficient to kill them, and the same thing has occasionally happened in the body.’  Almost 70 years later, we find ourselves towards the end of antibiotics. In honour of ‘European Antibiotic Awareness Day’, I thought I’d compare several attempts to outline approaches to curb antibiotic resistance:

I’ve listed the common themes that emerged in my order of priority (see Table above):

The noises coming from the global opinion leading healthcare authorities, such as ECDC, CDC and national Departments of Health give me some confidence that the problem of antibiotic resistance is at least now firmly on the agenda. Furthermore, the fact that the solutions mooted by the G8 politicians align closely with those proposed by the expert academics is encouraging. However, the challenges of antibiotic resistance will only grow is left unchecked. We are facing a complex, multifaceted problems, which demands a complex, multifaceted solution. In the pre-antibiotic era, prevention was all we had and we may be there again before too long.

Drs Tara Palmore and David Henderson have written an engaging ‘view from the trenches’ in CID reflecting on their efforts to control an ongoing outbreak of CRE at the NIH Clinical Center, beginning in 2011.

The review outlines their interventions, including:

The authors discuss the problem of determining which of these interventions worked, since they were implemented more or less simultaneously; the so-called “kitchen sink” approach (Figure). A recent systematic review performed by ECDC identified this problem in virtually all studies evaluating control interventions for CRE.

There’s an interesting section on the ‘unintended consequences’ of publishing in report, including the inevitable scaremongering in some parts of the lay-press. It wasn’t all bad though; this is an unusually detailed article based on the original NIH outbreak report in the Washingtonian.

Some reflections from me: