It is always the same. If I think that I had a reasonable idea and put it on-line, it will only take a day or two, until friends and colleagues let me know, that others had the same idea – just earlier. In this case, John Ferguson (@mdjkf), brought to my attention, that Professor Lyn Gilbert started the same discussion in Australia (Link). As always, I am depressed for about 5 seconds and start to come up with a new, old idea.

Despite the discussion in Down-under, I have promised to post the results of my questionnaire. On Twitter, some were surprised how little evidence exists to support antibiotic prescribing dogmas (Eli Perencevich, @eliowa), whereas others like Christina Vandenbroucke-Grauls (@ChristinaGrauls) believe that we have plenty of evidence from lab experiments and theory to answer the question. Most importantly, “every bit of antibiotic leads to resistance”.

END_OF_DOCUMENT_TOKEN_TO_BE_REPLACED

For those of you who have had your head in a hole all week, you may not be aware that today is European Antibiotic Awareness Day, which coincides with Global Antibiotic Awareness Week. The antibiotic stewards amongst us (which should really be all of us!) have launched many and varied campaigns to highlight the need to handle antibiotics, our ‘miracle drugs’, with care (see Andreas’ 30-second-antibiotics-myth-buster-survey, for example).

END_OF_DOCUMENT_TOKEN_TO_BE_REPLACED

Here we are again, the year flew by and it’s time for Antibiotic Awareness Day/Week. This time around, I will spend my time in a call-center, answering questions of concerned citizens/ex-patients in Germany. Smart idea of a friend in the German public health service and probably smarter than doing what we usually do: organize a meeting, ask all our colleagues to come, and preach to our own community.

While I believe that there is no ID or Clin Micro person left that is not convinced of the importance of saving our miracle drugs (Australian campaign), I know that I will get questions I can’t answer, or at least, don’t know if my answers are truly true.

Here it goes, my antibiotic conundrum that could  be classified as “Antibiotic Myth”:

Is it true that I have to finish my antibiotic treatment as prescribed?

Will “too short” lead to antimicrobial resistance, or is it the “too long”? My guess, 99% of the professionals will answer this question by releasing an avalanche of questions, regarding the bug, the host and the site of infection, but I have to insist on a simple “yes” or “no”. Sorry, but those are the rules of the “30-Second-Questionnaire” and you can’t argue the rules.

Thus here is my request. Follow the link to the questionnaire, take 30 seconds to answer the question (and 4 others) and email, twitter, blog or use any kind of communication you can think of to forward it to your friends and family. I promise, I will post the outcome right here, a week or two later.

The UK guidelines for the prevention and control of multidrug-resistant Gram-negative bacteria (MDR-GNB) are published this week. It’s useful that the publication of these guidelines coincides with Antibiotic Awareness Week because MDR-GNB are brining us ever closer to the end of antibiotics. Although the guidelines don’t cover the treatment of MDR-GNB (this will be addressed in a forthcoming guideline), these highly resistant MDR-GNB leave few therapeutic options. Even when they remain susceptible to some antibiotics, these antibiotics are not front-line antibiotics for a reason (including poor tissue penetration and side effects). Furthermore, we are already seeing resistance to last-line (aka end of the golden-antibiotic-road) antibiotics e.g. colistin. Therefore, the old adage that ‘prevention is better than cure’ has never been so true!

END_OF_DOCUMENT_TOKEN_TO_BE_REPLACED

Welcome to the third and final installment of my reflections from HIS 2014. You can access the ‘box set’ via the list at the start of Part I.

Self-professed pragmatist Prof Holmes reminded us that the perceived and actual priorities of society, politicians and healthcare systems mean that it’s not all about infection control. We must harness macro (inter-hospital) and meso (inter-departmental) and micro (inter-team) relationships to successfully control transmission. This requires shared beliefs, reinforcement systems, role models, and the right staff skills. Plus, we need to get HCAI on the metric dashboard of CEOs. Indeed, HCAI outcomes are a sensitive surrogate marker of organisation performance, so this should be attractive to the hospital CEO once understood. We also need to embrace the public to tackle antibiotic resistance. Government messages about reducing antibiotic resistance have helped our day job (and proved popular on Twitter)! Involving patients and the public in our research makes everybody happy; patients and the public like it, and it improves our research (and helps to win grants). We need to embrace ‘mHealth’ in all its forms – games, apps and more – remembering that dinosaurs became extinct. The bottom line? Organisational, structural and managerial issues are crucial for the prevention of healthcare-associated infection (and the Lancet ID agrees). 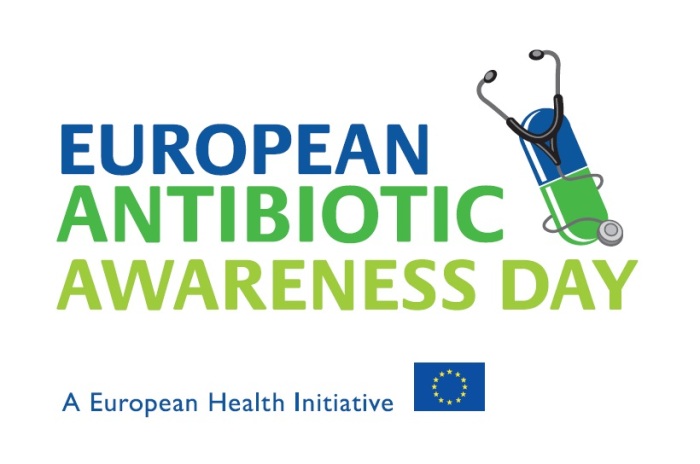 Since it was the occasion of European Antibiotic Awareness Day (EAAD) 2014, the talk from the impressive Prof Goossens was well timed! EAAD is a campaign aimed at the public and professionals to highlight the issues around antibiotic use and resistance. Many of the campaign materials are useful, including a toolkit for self-medication without antibiotics and various infographics. Prof Goossens spent some time discussing how to measure the impact of EAAD. A lot of questionnaire type surveys have been performed, and it does seem that EAAD has prompted a swing towards a better understanding of antibiotics, so well done to all involved.

What’s hot and what’s not in infection prevention and control?

Dr Jenny Child (JHI Editor) presented a view of the literature through the eyes of a journal editor! Bad research can do much damage:  look no further than the MMR & autism debacle. Worth remembering that indifferent, uncitable papers will not get published; it’s just not in the journal’s interest. Also, clever, ‘pseudo-scientific’ language is a barrier to good science. The bigger the journal, the plainer the language. Finally, whilst JHI has traditionally been a quantitative medicine journal (with p values and 95% confidence intervals!), like it or not, social science is coming!

Esmita Charani began by explaining the need to achieve behaviour change, not education in isolation, in order to effectively moderate antibiotic prescribing behaviour. The local prescribing culture is likely to influence prescribing policy more than the national guidelines. Junior doctors often don’t have a clue what to prescribe, so it’s a case of follow-my-leader (i.e. consultant). But targeting hospital consults alone won’t get us out of the mess of antibiotic resistance. We need to engage a wider audience, including the public.

Meanwhile, Prof Inge Gyssens outlined the impact of antimicrobial restriction: contribute to MRSA reductions, prevent the emergence of MDR-GNR, and may help to bring outbreaks under control. The only downside is that switching to another antibiotic may cause more problems than it solves – a ‘squeezing of the balloon’ type effect. In a way, doctors are “addicted” to antibiotics. Put simply, antibiotic stewardship through restriction is a ‘cold turkey’ approach that works.

Although not a formal debate, Esmita Charani and Prof Gyssens did a good job of presenting both viewpoints. I was left concluding that both persuasion and restriction are important but when it comes down to it, restriction is more important than persuasion. Left to their own devices, antibiotic prescribers will sometimes make poor choices; restriction takes away that choice!

I really enjoyed HIS 2014 – especially the opportunity to contribute to the conference via my talk (on trends in the IPC literature) and poster round. The conclusion of my talk was to look into my crystal ball and highlight what will be trending by the time HIS 2016 comes around:

During Alexander Fleming’s Nobel Lecture on December 11th 1945 he said ‘It is not difficult to make microbes resistant to penicllin in the laboratory by exposing them to concentrations not sufficient to kill them, and the same thing has occasionally happened in the body.’  Almost 70 years later, we find ourselves towards the end of antibiotics. In honour of ‘European Antibiotic Awareness Day’, I thought I’d compare several attempts to outline approaches to curb antibiotic resistance: 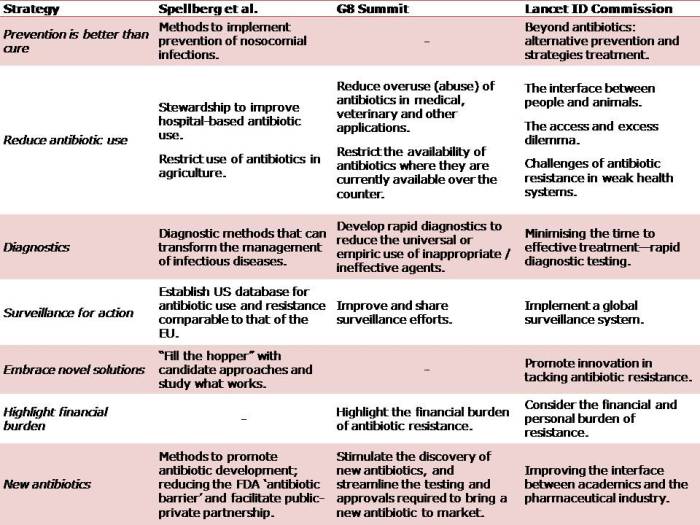 I’ve listed the common themes that emerged in my order of priority (see Table above):

The noises coming from the global opinion leading healthcare authorities, such as ECDC, CDC and national Departments of Health give me some confidence that the problem of antibiotic resistance is at least now firmly on the agenda. Furthermore, the fact that the solutions mooted by the G8 politicians align closely with those proposed by the expert academics is encouraging. However, the challenges of antibiotic resistance will only grow is left unchecked. We are facing a complex, multifaceted problems, which demands a complex, multifaceted solution. In the pre-antibiotic era, prevention was all we had and we may be there again before too long.