Skip to content
HomeUniversal vs. targeted interventions in infection prevention and control: the case for a targeted strategy

Today, I participated in a debate with Professor Ian Gould on universal vs. targeted interventions for infection prevention and control at Infection Prevention 2014. I was arguing for a targeted approach, and you can download my slides here, and you can listen to a recording of the talks here.

Universal interventions are appealing: they make no discrimination between patients, there’s a clear message for staff, and you have no way of knowing reliably who is colonized anyway! However, for me to get behind a universal intervention, it would have to demonstrate short-term, long-term and cost-effectiveness.

Before getting into the details of my argument, it is worth defining what we mean by ‘universal’ or ‘targeted’ interventions (see Table 1, below). It’s important to note that an intervention can be targeted either to an individual (e.g. chlorhexidine given to decolonize the skin of a patient known to be colonized with MRSA) or targeted to a population (e.g. chlorhexidine given to all patients in high risk settings, such as the ICU). Screening is an interesting one. It’s easy to mistake screening as a universal strategy when it’s applied to all patients (as is common in the NHS), but it’s fundamentally a targeted strategy to identify patients for an intervention (such as isolation and / or decolonization). A truly universal strategy has no need of screening. 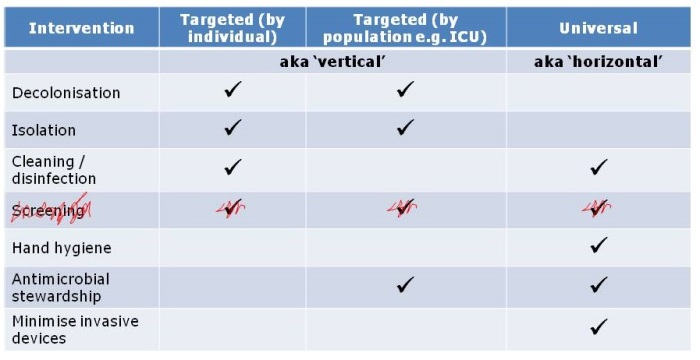 A number of universal strategies that have demonstrated some level of short-term effectiveness fail in terms of long-term effectiveness due to the promotion of bacterial resistance (or reduced susceptibility). For example, selective digestive decontamination on a group of patients resulted in a sharp increase in gentamicin resistance, and perhaps more worryingly an increase in colistin resistance. Furthermore, a microbiomic analysis of a patient undergoing selective digestive decontamination identified a seven-fold increase in the abundance of aminoglycoside resistance genes in the ‘resistome’.

Another way in which universal strategies that are effective in the short-term may fail in the long-term is due to reliance on human beings to maintain compliance with protocols. This is relatively easy during studies, where staff have both support and scrutiny to drive performance. When the spotlight is off and they’re on their own, performance is less impressive. We can see this type of “reverse Hawthorne effect” in compliance with contact precautions, and in hand and environmental hygiene.

Once a strategy has demonstrated both short-term and long-term effectiveness, it must demonstrate cost effectiveness before widespread adoption. Even if you disagree with me and consider screening to be a universal strategy for MRSA when applied to all patients at the time of admission, it has failed to demonstrate cost-effectiveness in almost all scenarios. Economic analysis using the standard threshold of £30,000 per Quality Adjusted Life Year (QALY) has shown that screening all admissions for MRSA is not effective for teaching or acute hospitals at current, high or low prevalence. Universal screening was only cost-effective for specialist hospitals (the vast minority), and then only at some levels of MRSA prevalence. For this reason, the Department of Health is going to reverse its recommendation for universal screening of all hospital admissions.

I can’t think of a single universal intervention that has demonstrated short-term, long-term and cost effectiveness (see Table 2). Decolonization using chlorhexidine comes close, but almost all studies of this intervention have been performed in an ICU setting, where this intervention is applied to a targeted population. I would be uncomfortable about using chlorhexidine for daily bathing of all hospital patients due to the risk of promoting reduced bacterial susceptibility.

Targeted interventions have been shown to be effective in reducing transmission, preserve the activity of our precious antimicrobial agents, require less modification of human behaviour, and are cheaper and less resource-intensive. So, on balance, I favour targeted interventions for infection prevention and control.

5 thoughts on “Universal vs. targeted interventions in infection prevention and control: the case for a targeted strategy”