WHO have published the first report of the Global Antimicrobial Resistance Surveillance System (GLASS) network. GLASS was launched a couple of years ago to try and address the massive black hole in our knowledge of global AMR resistance rates. The extensive report details progress to date, focussing on which countries have established surveillance systems, and how the initial data looks (which you can also view via an online database).

We have a great connected surveillance system in Europe in EARS-Net but that is the exception rather than the rule, globally. There are huge swathes of the globe where we know virtually nothing about AMR rates – apart from the fact that antimicrobial use is rife and unregulated, so we know it’s not going to be a pretty picture. GLASS has managed to enrol 42 countries, around half of which are submitting data (see Figure 1). This is a strong start, but I hope to see this rise to virtually everywhere to give us a truly global view of AMR in coming years. 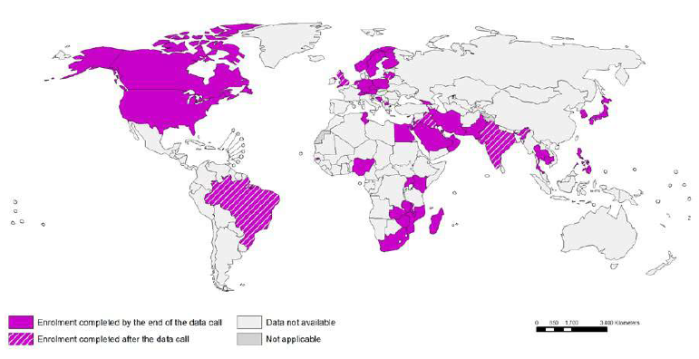 GLASS recommends three crucial components for a national surveillance system: a national co-ordinating centre, a national reference laboratory, and sentinel surveillance sites. For those of us that have had these for ever, it seems difficult to imagine life without them – but that is the reality in most of the world! Clearly, the drive by WHO to address this is something we can all get behind.

One of the fundamental limitations of getting a true picture of AMR is that getting accurate antibiotic sensitivity data is surprisingly tricky. During my PhD, I did a lot of bench antimicrobial susceptibility testing in S. aureus, and it’s not always black and white. Even well-resourced and experienced laboratories get caught out sometimes. Case in point is our recent experience with detecting colistin resistance in K. pneumoniae – our local methodology (in a well-resourced and experienced lab with strong quality control using methodology based on national guidelines at the time) concluded that 24% of isolates were colistin resistant, whereas in fact 66% were resistant when the national reference lab got hold of the samples!

The report is careful not to make any comparisons between rates of resistance in the countries that are reporting through GLASS because of differences in data quality and completeness. However, I couldn’t resist making a crude comparison, focussing on carbapenem-resistant K. pneumoniae in blood isolates (see Figure 2). Not many countries reported on this, and unsurprisingly rates of resistance were high in some parts of the world (especially Egypt, with almost two thirds of isolates resistant). Then Georgia, Macedonia, and Malawi come in at close to 20%. I’ve included the latest heat map from EAR-Net for comparison, showing the proportion of invasive K. pneumoniae isolates resistant to carbapenems in 2016 (Figure 3). Things are looking ok in most parts of Europe, but grim in Greece, with 66% (!) of invasive K. pneumoniae now resistant to carbapenems, followed by Italy (34%) and Romania (31%).

Figure 2: Estimated proportion of non-susceptible isolates to meropenem in K. pneumoniae blood cultures by country in 2016, GLASS. [Thanks to the fab Yeeshika Shersing for extracting this from the GLASS report and producing this figure for me.] 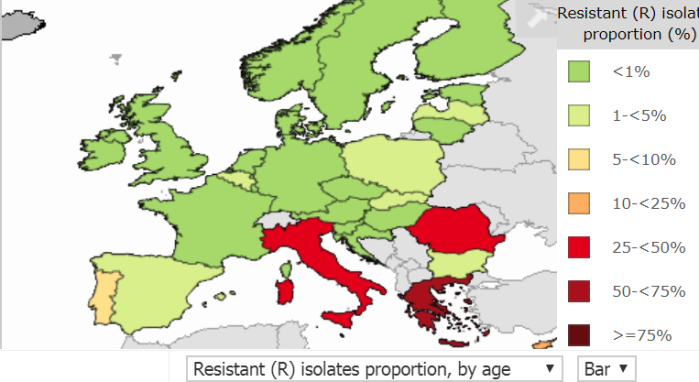 I am excited to see this progress with GLASS, and I hope that come 2020 or so when the project is a bit more advanced, we’ll have a much better global overview of AMR. Although I fear it may not make for comfortable reading…