Skip to content
HomeTime to go shopping for a UVC system?

It is great to see the long-awaited ‘Benefits of Terminal Room Disinfection’ (BETR-D) randomised controlled trial of a UVC automated room decon (ARD) system published, in the Lancet, no less! This study firms up the importance of environmental contamination in transmission, and demonstrates additional benefit of UVC over and above enhanced conventional methods for VRE, maybe for MRSA, but not for C. difficile.

WARNING: this is a bit of a monster-blog. I strongly recommend that you don’t bother reading this, but do read and absorb the study in detail!

The study is hugely impressive: a multicentre, cluster-randomised, crossover trial in 9 hospitals over 2 years with a whopping 31,226 patients. The study was focussed on rooms occupied by a patient on contact precautions for an MDRO/C. difficile, and evaluated the impact of four different disinfection strategies:

Each of the hospitals in the study performed a randomised sequence these four strategies in 7 month blocks. Extreme lengths were gone to (and I have chosen ‘extreme’ carefully!) to standardise and improve procedures. This included the provision of new equipment and an extensive training programme for cleaners. Rates of hand hygiene compliance, cleaning performance (using a pH-based system that is new to me, and sounds promising, and the more conventional UV-fluorescent markers), and colonisation pressure were measured as potential confounders.

A composite acquisition rate was the primary outcome (including MRSA, VRE, C. difficile, and MDR Acinetobacter). The acquisition rate for each of these pathogens was also measured individually. The definition of acquisition required the same species of bacteria to be acquired in the incoming occupant, although molecular typing was not performed. Any patient known to have the target pathogen in question in the past 12 months was not considered at-risk for acquisition.

I am going to focus on the results for the per-protocol analysis, which I think is the best measure of the impact of the four different strategies (a good number of patients in the intent-to-treat population who didn’t make it to the per-protocol population; for example, 38% (4067/10616) of patients who should have received UV did not). The composite infection rate significantly reduced by 31% when UV was added to QAC (relative risk [RR] 0.69, confidence interval [CI] 0.50 to 0.95), p=0.025). The effect was more pronounced for VRE than for MRSA, and there was no reduction in C. difficile (see Fig 1). Curiously though, there was no significant improvement in outcomes when UV was added to bleach (RR 1.0, CI 0.81 to 1.23, p=1.00). However, when rooms occupied by patients with C. difficile were removed from the analysis, the bleach + UV arm became statistically significant (18%* reduction) (you have to dig into the appendix to find the numbers here…RR 0.82, CI 0.67 to 0.998, p=0.048). The composite infection rate in the bleach arm was significantly lower (26%) than the QAC arm (RR 0.74, CI 0.61 to 0.91, p=0.004), but this significant difference disappeared when the C. difficle patients were remove; this makes sense because why would you expect a sporicidal agent to have an improved clinical outcome when no spores are around? 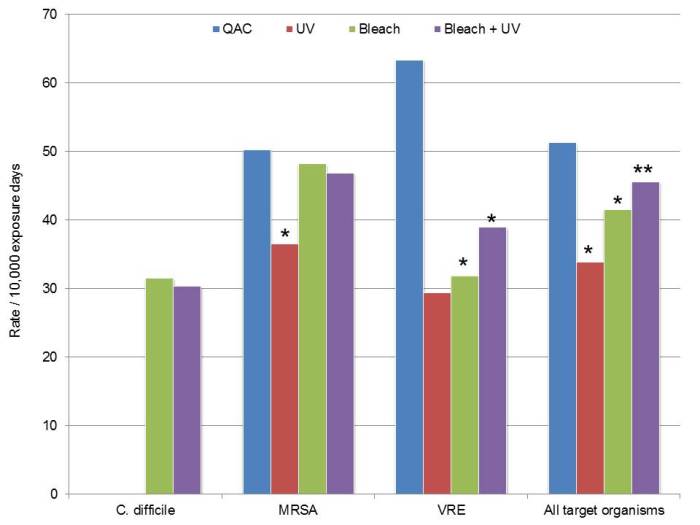 The team also took microbiological cultures from 92 rooms after the disinfection strategy had been executed. The micro cultures broadly supported the clinical findings, with the most reduction achieved for VRE, followed by MRSA, and not a great deal of impact for C. difficile (see Fig 2).

Figure 2. The mean number of CFUs detected in rooms in the four study arms; approximately 100 rooms were samples after the disinfection strategy had been executed.

Reassuringly, there was very little increase in room turnaround time for the UV arms (around 10 minutes), and there was no measurable impact on patient flows from the ED to the hospital wards.

Here are some of the key points for discussion:

7 thoughts on “Time to go shopping for a UVC system?”