Skip to content
HomeCPE: seek and ye shall find

We recently published a study in the Journal of Antimicrobial Chemotherapy relating the impact of introducing an enhanced testing* programme for CPE in London. (And yes, this is the first post for a while that isn’t on COVID-19!) Following an outbreak of NDM-producing Klebsiella pneumoniae affecting 40 patients in 2015 (published elsewhere, here and here), we ramped up our CPE testing programme. The number of patients carrying CPE increased substantially, from around 10 patients per month in June 2015 to around 50 per month in March 2018. However, the proportion of tests that were positive for CPE remained constant at around 0.4%, suggesting this was more effective carrier identification rather than a swelling pool of carriers per se; seek and ye shall find! Curiously, the majority of CPE identified were not linked in time and space with other CPE, suggested they represented a ground-swell of CPE coming into the hospital, rather than frequent in-hospital transmission. Also, the number of patients with CPE infections during the study period did not increase, which was reassuring.

Before the outbreak in 2015, we were testing a relatively small number of high risk patients. The enhanced testing programme kicked off with around 4,500 patients in July 2015 ramping up to >10,000 in March 2018. Clearly, testing this many patients each month has important financial, operational, and patient acceptability implications. Therefore, it’s important to take stock and understand what impact the testing programme had. So, we reviewed our CPE surveillance data to evaluate the programme.

The increase in detection of CPE mirrored pretty closely the increase in the number of CPE tests performed, with most of the patients with CPE detected from screening samples and not clinical cultures. This suggests that we were not tracking an increase in the actual prevalence of CPE in our patient population, but rather uncovering a pre-existing pool of carriers through more testing (Figure 1). This picture is very different to the situation in a different hospital on the other side of London (although not far away geographically), where only a few patients with CPE were identified by testing all admissions over several months. This difference may be related to time (the study in the other London hospital was done several years earlier) or patient / community demographics.

Figure 1: Trends in the detection of CPE and in the number of tests performed, deduplicated by patient (each patient appears only once). 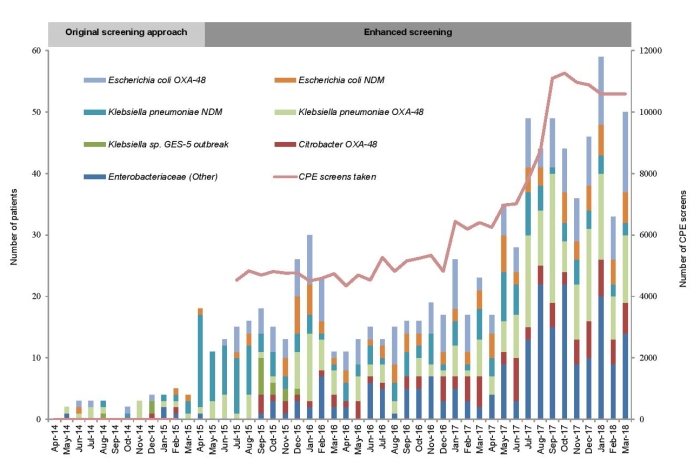 Unlike other centres in the UK (most notably Manchester), we did not see a predominant type of CPE. There was a mixed bag of bacterial genus/species and carbapenemase genes detected over the course of the study. Whilst some were linked in time and space and identified as outbreaks, most were not, and probably represented repeated and sporadic introductions of patients carrying CPE into the hospitals (Figure 2). What we didn’t account for was potential cross-species sharing of carbapenemase-carrying plasmids, which would require some more detailed molecular analysis to investigate.

Finally, we performed an evaluation of compliance with the testing policy, which was pretty good in the specialties that were performing universal testing, and slightly lower in specialities performing risk-based admission testing.

These findings suggest that enhanced testing is likely to detect previously unidentified carriers of CPE – and calls for more widespread point prevalence surveys in hospitals not routinely performing widespread testing for CPE in order to configure routine testing programme to identify ‘silent’ carriers who could be contributing to in-hospital transmission.

* I would usually say ‘CPE screening’ but COVID-19 has messed with my head. With all of the symptom screening that has been done for COVID-19 with or without laboratory testing, combined with the “Test and Trace” meme, I’m coming around to the idea that ‘[MDRO] testing’ may be better than ‘[MDRO] screening’. Your views welcome as ever…