To me, the end of 2019 was mind troubling. My deeply beloved mother, 76 years, was hospitalized on Dec 4th and passed away on Dec 19th due to end stage COPD. At the same time I was reading Samuel Shem’s new novel, Man’s 4th Best Hospital, the sequel to The House of God. The contrast created by my mothers’ treatment in one the smallest hospitals in our country and the book content could not have been greater, neither was the prospect of modern medicine more grim.

For those not familiar to the House of God: Published in 1978, the “novel follows a group of medical interns at a fictionalized version of Beth Israel Hospital (Boston) over the course of a year in the early 1970s, focusing on the psychological harm and dehumanization caused by their residency training.” They are supervised by the senior resident named the Fat Man, who teaches them the 13 “Laws of the House of God” (such as “At a cardiac arrest, the first procedure is to take your own pulse” (law #3) and “If you don’t take a temperature, you can’t find a fever” (law #10). A must-read during my residency training in the 1990s. When published it was considered funny, hilariously sarcastic and overdone, but after some years the harm created by weekly 100+ hours of work became widely apparent and led to considerable changes in how residents (and doctors) now do their work.

After 40 years, the Fat Man has reunited the team of former residents. The rival hospital of the House of God – the Best Man’s Hospital (BMH) – has sunk to rank 4 (for the country) and the Fat Man must bring it back to the top, where it had been for decades. He starts the Future of Medicine Clinic (FMC, aka Fat Man’s Clinic) where the team aims to bring the human back in health care. 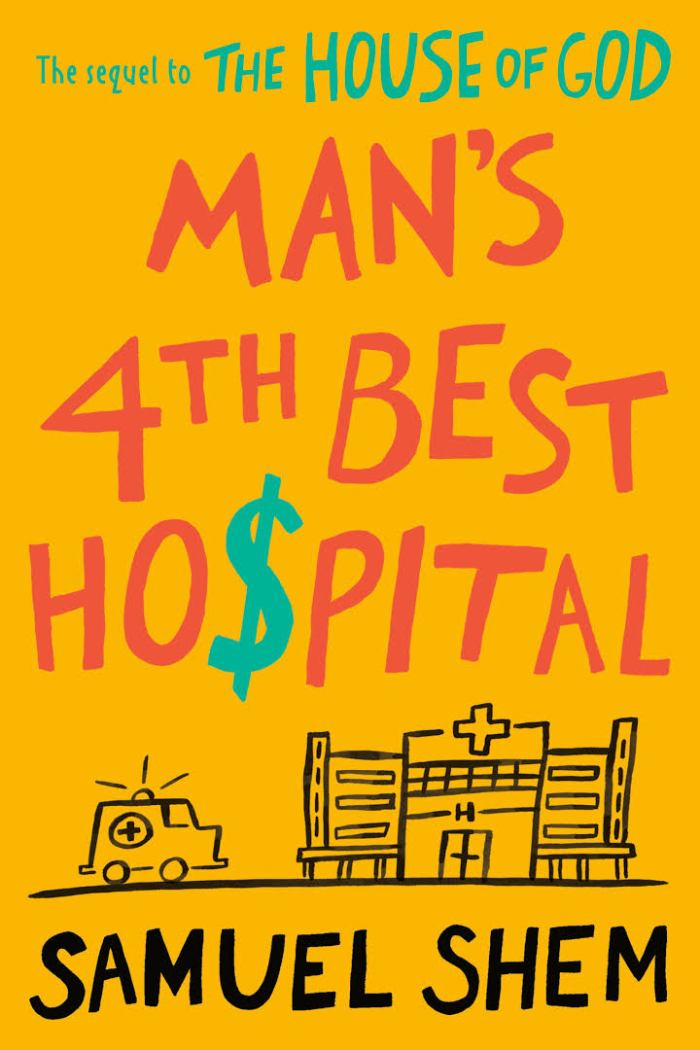 So, what happened in 40 years? The BMH hospital had been bought by a full-for-profit organization – BUDDIES – that had bought most hospitals in the city, and had “a 73,000-weak bureaucracy staff, costing 26-billion dollars a year, which was inserted into the health-care food chain between hospital and insurance conglomerates”. To guarantee income hospitals were obliged to use HEAL, the Healthy Electronic Assistance Link. Doctors can only click on preprinted text (no free texts) and each click is automatically billed. The more you click, the more you cash, the happier the CEO. To reach the end of the patient record, you need all your consultation time to click, which is only possible when turning your back to the patient.

Critically important is the admission diagnosis, as this defines reimbursement. So, if admitted with a low-reimbursed diagnosis, there is a team of non-medic controllers to make sure that the patient is discharged within 2 days. For this, they can overrule the medics. Doctors no longer suffer from 100+ working hours, at least not in the same hospital. Here, doctors rotate, and the nocturnalists only work at night (“come in for 60 patients they don’t know, to hand over 60 patients they still don’t know in the morning”). Yet, to raise a family, doctors – at least in the book – also run shifts in private hospitals, up till the point of physical exhaustion. Another reason why BUDDIES bought all these hospitals is the free access to health data. Somewhere is a bunch of data scientists creating artificial intelligence and the results flow back as – obligatory – treatment guidelines. The Fat Man has discovered just one small – GIGO – problem with this approach. GIGO stands for Garbage In = Garbage Out.

There are very entertaining (though frantically realistic) cases on how the combination of HEAL, controllers, nocturnalists, ambition, guideline recommendations and algorithms kill patients (it’s fiction!).

It may have been my troubled state-of-mind that I saw resemblance to current developments in the healthcare setting where I work. An electronic record system (her called HiX) now protects our students from continuously searching for old – and unfindable – chest X-rays and patient records, but it also dictates what we can do (and what no longer can be done after each “update”). There is rising pressure on accurate diagnosis recording to guarantee reimbursement, creating risks of fraud, for which we have controllers (so far, they don’t discharge). We have all kinds of checklists that need to be filled in, mainly by nurses, not because it increases the quality of care (we just don’t know), but because our beloved Quality System (coming from the US) mandates it. And patients acutely admitted through ER on Friday afternoon may see 5 different physicians, before their own doc – familiar with their medical history – appears on Monday morning. But before that, their name, day of birth, presence of pain or whether they have recently fallen have been asked and recorded many times.

So what was the contrast? My mum was in a hospital with about 110 other patients and an ICU with 5 beds (of which I saw only 3 occupied), 200 meters from her home. Within 2 days we knew most of the medical and nursing staff by name and they always had time to answer questions and offer assistance. No one asked for my mothers’ day of birth or whether she still had the same name. Not the place to get a lung transplant, but the care was tender and good. When the inevitable “patient outcome” was obvious, no push for anything else than her wishes. I hope the hospital is not forced into merger with any of the surrounding – larger – hospitals, all at least 25 km away from what now is my fathers’ home.

As the House of God, the Man’s 4th Best Hospital depicts is hilarious, sarcastic and overdone. Yet, this frightening picture of modern healthcare may not be as fictionalized as many think. The good news: regardless what happens the docs at the Man’s Best remain motivated…