I have been following the literature around the use of faecal microbiota transplantation (FMT) for the treatment of recurrent Clostridium difficile infection (CDI). FMT is spectacularly effective but rather crude – and may have some associated risks, not least the possibility of transmissing infectious organisms we have not yet discovered! There is also the issue of administration. Compared with recurrent CDI, a duodenal infusion (aka tube up the backside) isn’t so bad – but an oral delivery would be preferable. The ‘crapsule’ (oral FMT) has been tested and is effective, but it requires a large number of crapsules to reach the required dose. So, the search is on to distill the effective elements of FMT into a format that can be delivered more easily. Some work has been done on exploring various combinations of live bacteria – with variable success.

END_OF_DOCUMENT_TOKEN_TO_BE_REPLACED

It was once thought that only bacterial endospores would survive on dry hospital surfaces for extended periods (measured in days and weeks rather than hours). Microbiological data indicates that a range of vegetative bacteria can survive on dry surfaces for extended periods. Whilst differing testing methods and conditions make comparison of survival times between studies difficult, it is clear that non-fermenting Gram-negative bacteria (such as Acinetobacter baumannii and Pseudomonas aeruginosa) survive considerably longer than the Enterobacteriaceae (such as Klebsiella pneumoniae and Escherichia coli).  However, the Enterobacteriaceae can survive for more than a month on dry surfaces. Indeed, a 2009 laboratory study highlighted substantial strain variation in the survival of K. pneumoniae, with the survival of three strains ranging from a 6-log reduction inside 3 weeks to a 1-log reduction over six weeks.

Environmental contamination with C. difficile spores, VRE and non-fermenting Gram-negative bacteria is now a well-established route of transmission. Whilst the same cannot be said for the Enterobacteriaceae, these studies combined with an Israeli article recently featured on this Micro Blog, show that environmental contamination with Enterobacteriaceae may be more important than previously thought. These findings are particularly important in light of the recent global spread of carbapenemase-producing K. pneumoniae.

Infected patients shed pathogens into the environment, resulting in increased risk of infection for the subsequent occupant of the room by a factor or two or more.1 For example, in one study, patients admitted to rooms previously occupied by patients with C. difficile infection (CDI) were 2.8 times more likely to develop CDI than patients admitted to rooms disinfected using conventional methods. Thus, most agree that more needs to be done to reduce contamination with C. difficile spores in order to interrupt transmission. However, what level of disinfection is required to prevent the transmission of C. difficile?

Lawley, et al.3 developed a murine model that provides useful background data on infectious dose. A dose-response relationship was established between the concentration of contamination in the cages and the proportion of healthy mice that developed CDI. All mice became infected when exposed to 100 spores/cm2 and 50 percent of mice became infected when exposed to 5 spores/cm2.  The point at which none of the mice became infected was a concentration of less than one spore per cm2. The mice were exposed to the contaminated cages for one hour. In the healthcare environment, room exposure times are usually measured in days and so these estimates are likely to be conservative. Although translating data from animal models to meaningful clinical practice is difficult, it appears from these animal models that a low concentration of contamination is able to transmit spores to a susceptible host, as is the case with other healthcare-associated pathogens such as norovirus. 4

The low infectious dose of C. difficile is not the only challenge to disinfection. Bacterial endospores can survive on surfaces for many months5 and are resistant to several commonly used disinfectants.6 Patients with CDI result in widespread fecal contamination with C. difficile present in the feces of infected individuals at concentrations in excess of 106 spores per gram.7 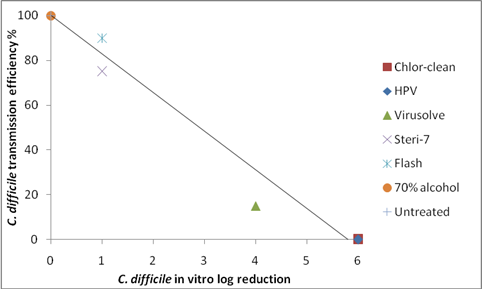 Figure. Correlation between in vitro log reduction and interruption of transmission of C. difficile spores in a murine model.3

The oxidizing agents sodium hypochlorite (bleach) and hydrogen peroxide vapour (HPV) were the only agents tested that achieved a 6-log reduction on C. difficile spores in vitro and completely interrupted the transmission of C. difficile. Notably, both bleach and HPV disinfection can reduce the incidence of CDI in healthcare applications.8-9  Based on these findings, the CDC recommends that surfaces potentially contaminated with C. difficile spores should be disinfected using EPA-registered sporicidal agent (such as bleach) or sterilants.

Recent data highlight the fact that agents with in vitro efficacy may not effectively eradicate hospital pathogens from surfaces due to limitations with achieving adequate distribution and contact time using conventional cleaning methods.1,10 The emergence of ‘no-touch’ automated disinfection methods provide an alternative to reliance on a manual operator for the inactivation of pathogens on surfaces.  HPV is an EPA-registered sterilant that achieves a 6-log reduction on C. difficile spores in vitro, eradicates C. difficile spores from surfaces and reduces the incidence of CDI and successfully mitigates the increased risk from the prior room occupant. 5, 9, 11-13

In summary, given the fact that a small number of C. difficile spores are sufficient to cause CDI in susceptible individuals, disinfectants with an EPA-registered sporicidal claim or sterilants should be used for disinfecting rooms used by patient with CDI. ‘No-touch’ methods, such as HPV, remove reliance on the operator to achieve adequate distribution and contact time and are appropriate for the terminal disinfection of rooms used by patients with CDI.