Shortages?! Slowly, I get used to it.  Basic antibiotics such as penicillins, CHX-wipes, or now, mupirocin. From what I hear we have to expect severe shortages (= no product) for the next few months. As the use of mupirocin for nasal decolonization of S. aureus (in combination with CHX skin wash) has become part of the pre-operative care for certain indications, the obvious question is: WHAT SHOULD I USE INSTEAD?

END_OF_DOCUMENT_TOKEN_TO_BE_REPLACED

I posted a blog a couple of years ago (was it really that long!) on a fascinating study suggesting that only 1/5 of S. aureus in hospital patients is hospital-acquired. My key conclusion from that study was that the number of potential sources for S. aureus that the team investigated was inadequate to draw any firm conclusions (they didn’t include staff, surfaces, or visitors). I concluded that ‘the next frontier of transmission mapping must be a more comprehensive evaluation of other potential sources…’. The authors must have been reading, because this study from the same group was published recently in Lancet ID, which is a more comprehensive evaluation of other potential sources.

END_OF_DOCUMENT_TOKEN_TO_BE_REPLACED

This month’s Roundup, as ever freely available on the Journal of Hospital Infection website, showcases some of the useful data emerging from the field of the ongoing outbreak of Ebola in West Africa. For example, emerging data suggests that the R0 (basic reproductive number) of Ebola is around 2, meaning that two transmissions will occur from every case. This means that Ebola is not massively transmissible compared with other infectious diseases – but this hasn’t stopped it increasing more or less exponentially in parts of West Africa!

Some interesting studies on the increasing or decreasing prevalence of MDROs are also covered in the Roundup. For example, one study reported a worrying doubling of the rate of CDI in the USA, whereas another study reports impressive reductions in S. aureus bacteraemia in Australia.

The Roundup includes a brief overview of the Infection Prevention 2014 conference, covered in more detail in a previous post in this blog, and finally, features Catherine Makison-Booth’s brilliant Vomiting Larry (pictured below)! 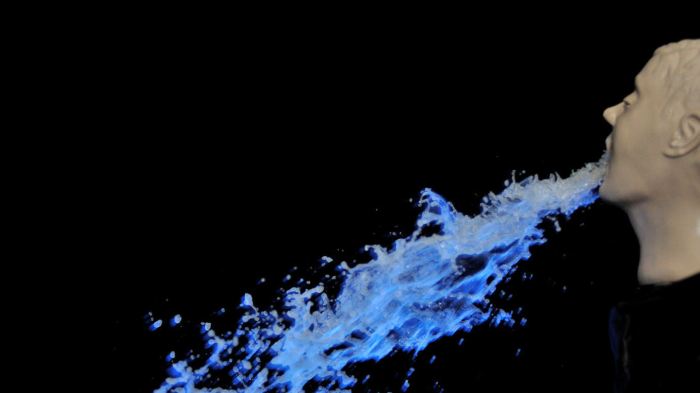 As ever, I’d be delighted to receive your feedback as to how the Roundup should evolve.

I recently posted an article on surprising finds of a study suggesting that horizontal transmission of C. difficile from known symptomatic cases may be less common that we thought. A group of researchers from Oxford, Brighton and London in the UK applied similar methodology to Staphylococcus aureus transmission with similar findings: only a fifth of S. aureus acquisitions could be attributed to patient-to-patient transmission.

All patients admitted to a 16 bed ICU in Brighton were screened on admission and weekly to detect S. aureus colonization and acquisition. Each isolate was typed by spa and whole genome sequencing (WGS). The number of acquisitions that could be linked using conventional methods (spa typing combined with an analysis of overlapping stays) vs. WGS was evaluated.

Only 14% (5/36) of the acquisitions available for typing were of the same spa type as another patient on the unit at the same time. All of these were MRSA. WGS discounted three of these apparent occurrences of patient-to-patient transmission, confirmed two and identified a further five (3 MRSA, 2 MSSA). So, in total, 7 / 36 (19%) of acquired isolates (5 MRSA and 2 MSSA) were linked to isolates from other patients (Figure).

The paper raises some interesting questions:

In summary, the major finding is that only 20% of patients who acquired S. aureus appeared to acquire it through horizontal spread from other patients. The next frontier of transmission mapping must be a more comprehensive evaluation of other potential sources: contaminated surfaces, contaminated air, nurses, doctors, cleaners, tea-tray deliverers and the list goes on…