I did a Webber Teleclass today on GNBSI. I covered some background and epi, drivers of GNBSI, and how we can take positive steps to tackle GNBSI. Here’s my slides, with a summary below.

I found a particular cool image of the ESKAPE pathogens (see Fig 1), the point being that 4/6 are of the pink Gram-negative variety. I think it’s fair to say the future’s pink in terms of infection management. The ‘growth organisms’ in terms of concern are almost all Gram-negative, with CPE being the most concerning in my view.

Around 0.5-1% of hospital inpatients will have a bloodstream infection at any one time (according to European and English Point Prevalence Surveys). Worth noting that something like a further 6 or 7% of patients will have some other type of HCAI (UTI, SSI etc), which progress to a BSI. Also worth noting that these data are from developed healthcare systems: the picture in developing countries is worse, with a overall HCAI rate of 15%, which a BSI rate of 3%.

Gram-negative BSIs are getting more common (see the trends in E. coli BSIs in Fig 2). Also, GNBSIs are getting more difficult to treat. For example, the ESPAUR (2018) reports that the number of antibiotic resistant Gram-negative bacteria is increasing notably in proportion to the increase in all GNBSI. More worryingly, in other parts of the world, carbapenem resistance is getting out of control – and once you lose the carbapenems, things get very tricky indeed. 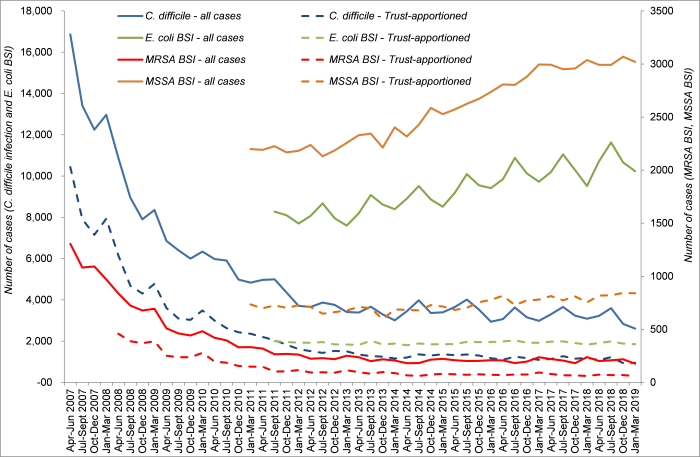 I spent quite a long time thinking about how best to illustrate the various drivers of GNBSI (see Figure 3). I categorised these into patient factors (in blue), drivers of acquisition (in red), and overarching drivers (in green). Very happy to receive feedback on this. There are other patient-level factors that influence the risk of GNBSI (e.g. obesity, mobility and the risk of HAP) but for simplicity’s sake, looking at the most common causes of GNBSI (especially E. coli BSI), I present this as a starter for 10!

One emerging and important driver of GNBSI is deprivation. There’s a north-south divide in terms of the rate of E. coli BSI in England, with the north of the country having much higher rates. Whilst we don’t know the reason for sure, it seems likely that this has to do with socio-demographic differences. Related to this, we published some work recently showing that overcrowded housing was associated with the carriage of ESBL-producing Enterobacteriaceae at the time of hospital admission.

There are some naysayers who think we can’t halve GNBSI by 2021 (not least Martin and Marc…) – and it looks increasingly likely that they’ll be right. Nonetheless, there is some low-hanging fruit in terms of GNBSI prevention. For example, UTI is the most common source of E. coli BSI, and dehydration is probably the most important driver of UTI. So, if we can do a better job of hydrating patients, we should prevent UTI, and prevent some BSI. Similarly, SSI can be a source of BSI and focus on ensuring the basics of SSI prevention are in place (e.g. the right prophylactic antibiotic at the right time) will prevent some SSI, and prevent some BSI.

Thoughts and feedback welcome, as ever.