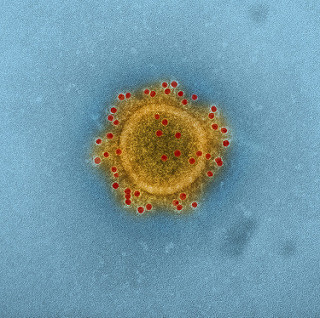 I blogged about a review of the surprising ability of some respiratory viruses (especially SARS-CoV and Influenza virus) to survive on dry surfaces last year. In the review, I predicted that MERS-Cov would also share the same ability to survive on dry surfaces as SARS-CoV – so I was interested to see a recent article in CID demonstrating that MERS is indeed more environmental than you may think.

The team in South Korea investigated surface contamination with MERS-CoV identified by PCR and culture surrounding 4 patients with MERS-CoV infection in 2 hospitals. The study ended up being quite well ‘designed’ since none of the patients had any symptoms when sampling began, so serial clinical and environmental specimens were collected throughout the course of the disease.

Viral RNA was detected all over the place (the authors describe this as “massive contamination” in the discussion). Overall, 30 (20%) of 148 environmental samples were contaminated with MERS-CoV RNA (see Figure below). The level of contamination with viable MERS-CoV was lower, with 6 (4%) of the 148 samples positive, in line with other similar studies. Concerningly, aside from a single radiography cassette that was sampled, the most heavily contaminated area was the anteroom tables, where you’d hope not to find any contamination at all! Here, 3/7 samples were positive for MERS-CoV RNA, and 1/7 grew viable MERS-CoV.

Figure: Contamination on the environment with MERS-CoV, by sampling method and site.

Another alarming finding was that environmental contamination persisted for some time after symptoms had resolved / patients had moved out of the rooms. The duration of MERS-CoV RNA detection from environmental samples since the patient’s last positive PCR ranged from 2 to 5 days. It is not clear to me whether this is due to extended viral shedding once symptoms have resolved or extended survival of the virus on surfaces; I suspect it’s a combination of the two. It’s a shame that the article does not disclose the type of cleaning / disinfection that was performed during the study.

These findings confirm that an environmental reservoir needs to be taken seriously when dealing with MERS-CoV, and argues for bringing out the big guns when it comes to environmental disinfection (such as daily use of bleach and hydrogen peroxide vapour or possibly UV at the time of patient discharge).