“33000 people die every year due to infections with antibiotic-resistant bacteria” this is what ECDC released on Nov 6, 2018, on their website. “Superbugs kill 33,000 in Europe every year” said CNN and the same wording was used (in Dutch) by our Telegraaf. Naturally, the headings were based on the ECDC study published that day in Lancet ID, which happened to be the most downloaded paper ever of the journal. But was this really what was published? Valentijn Schweitzer and I got lost in translation when trying to answer that question.

What is your interpretation of this conclusion and the newspaper headings?

So how was this calculated in the study? Let’s use MRSA BSI as an example. Based on the systematic review performed (in the supplement, page 172) they set total MRSA BSI mortality at 17.9% and baseline BSI (non-MRSA/MSSA) mortality at 13.7% (range 7.1%-20.3%). Thus, MRSA mortality must be 4.2% (17.9% minus 13.7%, see formula). So, what does this mean for the Netherlands?  With 42 MRSA BSI/year and a total MRSA BSI mortality of 17.9%, 7 of these patients die each year. Yet, 5 of them (the 13.7%) would also have died from MSSA BSI, so the proportion of deaths truly (and exclusively) attributable to methicillin-resistance is 23% of 7, is 2. In other words, for MRSA BSI in the Netherlands the interpretation is that a total of 7 patients die with MRSA BSI, and that 2 of these die because of methicillin-resistance. For all pathogens it was estimated that 157 patients died after an AMR BSI in the Netherlands, and that 50 (32%) died because of the resistance. As mentioned in 2 previous blogs, we strongly feel that the attributable mortality figures for the super-killer-bugs in the Netherlands (i.e., colistin-resistant E. coli and K. pneumoniae and 3rd generation cephalosporin resistant E. coli and K. pneumoniae) were hugely overestimated, reducing the number of deaths because of antibiotic resistance in our country to the numbers expected (close to zero).

In this Table we have listed the figures for BSI, for the Netherlands. 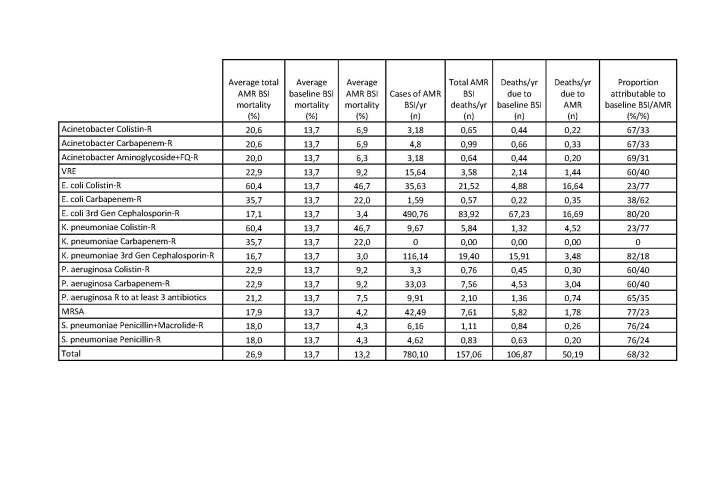 In the Netherlands, 76% (157/206) of the total AMR infection deaths were due to BSI. If we assume that the same proportion of AMR infections are due to BSI in Europe,  25.164 patients would die with AMR BSI infections, of whom 8,053 (again 32%) would die because of the resistance, which includes the deaths following BSI caused by colistin-resistant but carbapenem susceptible bacteria. This paints quite a different picture than the news headlines. Why is this distinction relevant? First of all, research is intended to deliver a correct answer to a question and that answer should be communicated correctly. Dying with or dying from are different things. Preventing selection and spread of resistance, without preventing infections, will at most prevent the “AMR mortality” fraction of the “total AMR infection mortality”. The correct interpretation of the study data was not immediately clear to us (and the press coverage didn’t help in getting us there). As we think all others knew exactly what was meant, we sincerely apologize for the confusion created by our previous blogs.