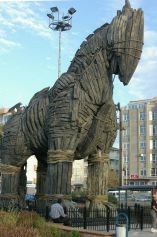 I’ve been mulling over the issue of sinks in clinical areas a lot recently and a paper published today in the Journal of Hospital Infection has really crystallised my thoughts. Sinks are everywhere; often extra ones are installed in the quest for high hand hygiene compliance however are we really thinking about the risks that these may cause apart from the traditional ones posed by Pseudomonas and Legionella? Do we even really reflect upon what they are used for?

I really like this paper by Grabowski and colleagues from Virginia in which motion-sensitive cameras monitored activity at four sinks over 60 days, generating 4810 videos, 38% of which were false-positives of activity by the sink. From the remaining videos, over five and a half thousand activities were examined for activity type. Hand hygiene comprised 4% of all activities, the lowest of any form of sink-related activity. Importantly, the authors looked at the fluids that were entering the sink, with soft drinks and juices being the most common however IV fluid bags were also emptied down the sink. This ceaseless supply of nutrients is what feeds sink biofilms as demonstrated superbly in a paper published in Applied Environmental Microbiology last year, in which Green Fluorescent Protein (GFP) Expressing- Escherichia coli were used to demonstrate two things. Biofilm formation and spread within plumbing systems and importantly, the extent of dispersal from a contaminated sink. The researchers found that if only water were run into the sink for 14 days, organisms remained contained in the p-trap, however once nutrients were periodically added, biofilm ascended the pipework at a rate of 2.5cm/day until the strainer was reached just 7 days later. The result of the strainer becoming contaminated meant that when the sink was accessed, droplets were dispersed to the surrounding area, including the area in which the person would be using the sink were standing and the tap area. Interestingly, the artificially contaminated sink was set up as one of six, three each side of a central drain. Five of the other sinks then became contaminated and the only one that was not within the duration of the study had the highest rise, so possibly only a matter of time.

The upshot from these two studies is that current practice is that staff are regularly providing all of the nutrients required to maintain a healthy population of gram-negative bacteria with the potential to disperse in a clinically meaningful manner. Thrown into the mix is the study from Prof. Peter Wilson’s group at University College London which demonstrated transfer of resistance genes within these plumbing systems.

So what to do? Good question! Well a couple of brave souls have taken the sink out of play altogether by going water-free, a report from Spain seeking to control endemic gram-negatives and a paper from the Netherlands that I previously blogged, where an increase in resistant Enterobacter cloacae was a problem demonstrating promise in terms of reducing gram-negative colonisation that became more pronounced with extended stay. When presenting this study as one of my favourite papers at a meeting earlier this year, I wondered what the staff might think of sink removal however this recent study has shown that with hand washing at a sink comprising the lowest activity maybe they wouldn’t miss it from a hand hygiene perspective now that alcohol hand rub, available at the point of care has become so established. So the question is – are sinks beneficial or are there risks contained within?

8 thoughts on “The Trojan Horse”