Skip to content
HomeTrends in US antibiotic use: we’re creating a monster!

Always great to see infection-related data in the top medical journals, like the recent overview of antibiotic use in the US published recently in JAMA Internal Medicine. There’s good news and bad news in the article: overall use of antibiotics in data from 300 US hospitals did not increase between 2006 and 2012. However, the use of key broad spectrum agents did increase significantly, including the carbapenems. I am sure that many of these uses of ‘top shelf’ agents is indicated by the resistance patterns of the organisms being treated, but the net effect is perpetuating the antibiotic-resistant monster!

The study is vast, encompassing 34 million discharges and 166 million patient days, including hospitals from across the USA. More than half of the patients included in the study received an antibiotic at some point during their stay. It was good to see that the overall use of antibiotics did not increased between 2006 and 2012. This is a surprise when compared with substantial increases in overall antibiotic use in English hospitals over a similar period. However, there were substantial increases in key antibiotic groups, including glycopeptides, β-lactam/β-lactamase inhibitor combinations, and, perhaps most worryingly, carbapenems. This suggests that there has been a ‘replacement’ of the sorts of antibiotics that we’d like to use with the sort of antibiotics that we’d like to preserve (Figure). The net result of this is selective pressure for ever-more resistant strains. 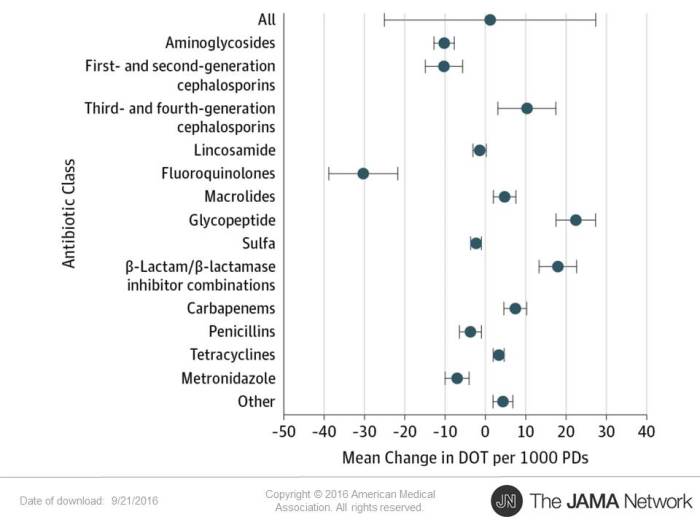 An interesting finding was significant geographical variation in the amount of antibiotic prescribed, even after adjusting for potential confounding variables (like size of hospital, and whether the hospital is attached to a medical school). Perhaps I missed it (and willing to be corrected), but the authors don’t seem to provide a plausible explanation as to why this may be? Could it be due to underlying patient demographics (you’d hope that the regression analysis would have accounted for this), or prescribing culture in these areas?

The study highlights the growing concern over the increasing use of ‘top shelf’ antibiotics in the US, and promotes the urgent need for careful stewardship to preserve the antibiotics that we have left.