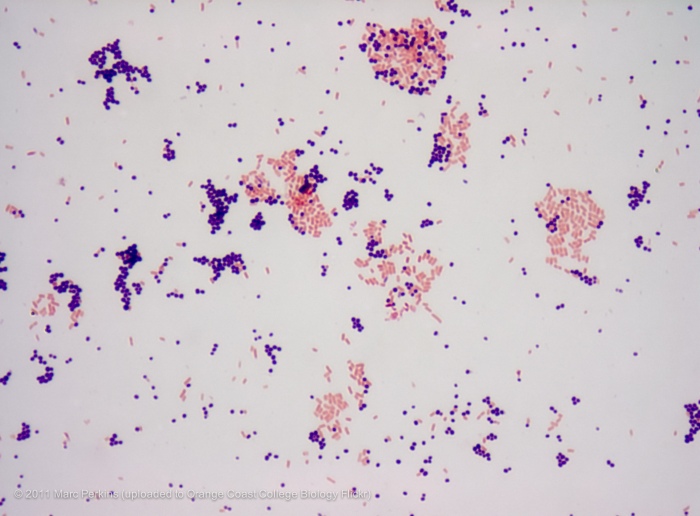 The threat from antibiotic resistance is more pink than purple. You probably need to be a microbiologist to get this: Gram-positive bacteria (such as MRSA and C. difficile) stain purple in the Gram stain, whereas Gram-negative bacteria (such as Klebsiella pneumoniae and Acinetobacter baumannii*) stain pink. All of the international concern surrounding antibiotic resistance from the WHO, CDC, PHE and others have focused our mind on one threat in particular: carbapenem-resistant Enterobacteriaceae (CRE). The Enterobacteriaceae family of bacteria are all Gram-negative, so we need to focus our drug discovery towards the Gram-negatives rather than the Gram-positives.

I blogged last week on the fanfare surrounding the discovery of Teixobactin. Whilst it looks promising, it’s still a long way from the pharmacy shelves, is most certainly not “resistance-proof” and, most importantly, only active against Gram-positive bacteria. I’ve received some useful comments in response to the blog pointing me in the direction of another novel antibiotic, Brilacidin.

Brilacidin is a novel antibiotic class that is in many ways more promising than Teixobactin, not least due to its activity against both Gram-positive and Gram-negative bacteria. Furthermore, it’s much closer to the pharmacy shelves, having undergone promising Phase 2b clinical trials (showing broadly comparable efficacy to daptomycin for the treatment of acute bacterial skin and skin structure infections).

Brilacidin is not without its problems though. Firstly, it is not active against A. baumannii. This is important, since multidrug-resistant – especially carbapenem-resistant – A. baumannii is a serious problem in ICUs around the world. Secondly, although the antibiotic is truly novel (working on the principle of ‘defensin-mimetics’), manufacturer claims that resistance is ‘unlikely’ are as fanciful as the “resistance-proof” claims associated with Teixobactin. Every class of antibiotics was novel once. And resistance has developed to them all!

So, there is no silver bullet coming through the pipeline. And there will be no silver bullet. However clever we are in discovering or designing new antibiotics, some bacteria will always find a way to become resistant. It would be naive to think otherwise. Drug discovery is one part of our response to the rising threat of antibiotic resistance, but we ultimately need to focus on prevention over cure.

* Actually, A. baumannii is a bit “Gram-variable” so is somewhat pinky-purpley – but let’s not get too hung up on that.

Image credit and caption: Marc Perkins. ‘Gram stain demonstration slide. A slide demonstrating the gram stain. On the slide are two species of bacteria, one of which is a gram positive coccus (Staphylococcus aureus, stained dark purple) and the other a gram-negative bacillus (Escherichia coli, stained pink). Seen at approximately 1,000x magnification.’

11 thoughts on “We need new antibiotics for Gram-negative, not Gram-positive bacteria”