If I was to perform a straw-poll of microbiologist on how long Enterobacteriaceae could survive on dry surfaces, I suspect that most answers would be measured in hours and days rather than weeks and months. However, a lab study that I performed in collaboration with Nancy Havill and John Boyce at Yale New Haven Hospital demonstrated that CRE are able to survive on dry surfaces for over a month.

For the study, which is published in the recent ICHE special edition on CRE and MDROs, we took two clinical isolates of CRE (Klebsiella pneumoniae and Citrobacter freundii) and dried them onto metal discs either in a water or TSB suspension. Discs were then enumerated every few days over a 19 day period. Both K. pneumoniae and C. freundii were able to survive for more than two weeks, and all but C. freundii dried in water survived to the end of the testing period (day 19) (Figure 1). In addition, K. pneumoniae and C. freundii dried in TSB survived for more than 40 days in an additional set of experiments. 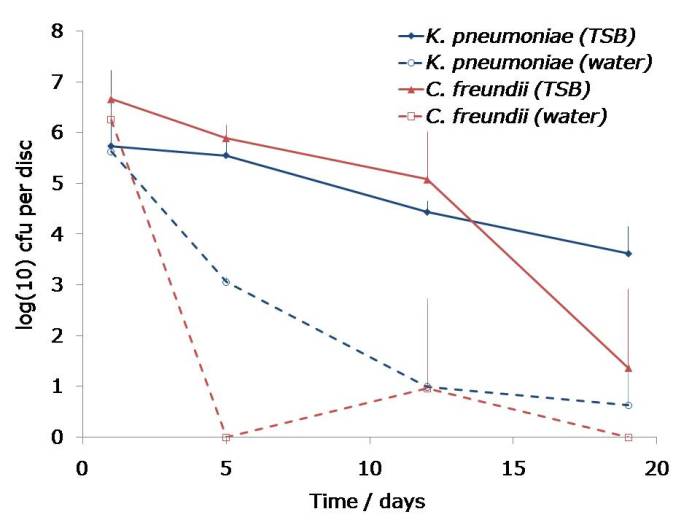 Figure 1. Survival of K. pneumoniae and C. freundii on dry surfaces dried on metals discs in either water or TSB; error bars represent +1 standard deviation on a mean of three replicates at each time point.

We shouldn’t be surprised by these findings. Previous drying studies of Enterobacteriaceae have demonstrated a range of survival times, from hours to months depending on the species, strain and testing conditions. Whist it is plausible that carbapenem-resistance imposes a fitness burden on Enterobacteriaceae that may curtail their survival time, the CRE that we studied seemed to exhibit survival times in the same range as carbapenem-susceptible Enterobacteriaceae. Furthermore, a previous study from my lab identified a stark difference in the survival times of three different K. pneumoniae strains (Figure 2). One of the three strains tested was dead by three weeks, whilst another survived for more than 6 weeks with a minimal log reduction.

It seems that CRE can survive for long enough on surfaces to be potentially involved in transmission. However, recent studies by Nseir et al, and Ajao et al. have failed to identify an increased risk associated with admission to a room occupied by a patient infected or colonized with resistant Enterobacteriaceae, in contrast with other bacteria including Acinetobacter baumannii. I suspect part of this is due to the fact that the Enterobacteriaceae are such a diverse family. A number of studies have identified large differences in the rate of contamination when comparing ESBL-producing E. coli vs. K. pneumoniae. If the prior room occupancy studies had been stratified and powered according to species within the Enterobacteriaceae family, I’d expect to see the increased risk from the prior room occupant for K. pneumoniae but not for E. coli. Also, the substantial variation in survival times amongst K. pneumoniae strains has clear implications for outbreaks of K. pneumoniae: are you dealing with a strain that is a “survivor” on surfaces? If so, more attention to cleaning and disinfection may be required.

In summary, CRE are able to survive on dry surfaces for weeks to months, which is long enough to be potentially involved in transmission; this justifies the advice for enhanced cleaning and disinfection to control the spread of CRE.