Skip to content
HomeCan the introduction of 6 copper items into ICU rooms really reduce the rate of HAI by >50%?

The recent article by Salgado et al.in the ICHE special edition is the long-awaited copper study: a multi-centre evaluation of the clinical impact of introducing 6 copper alloy high-touch sites into the rooms of patients on three ICUs. I’ve been looking forward to getting my hands on this study for some time!

Patients (n=614 following exclusions) were randomized to intervention ‘copper’ rooms and control ‘non-copper’ rooms in three USA ICUs over an 11 month period. The only difference between the rooms was the presence of six items made of copper alloy, comprising bedrails, overbed tables, IV poles and visitor chair arms in all rooms and the nurse call button, computer mouse, computer palm rest and rim of a touch-screen monitor in other rooms. 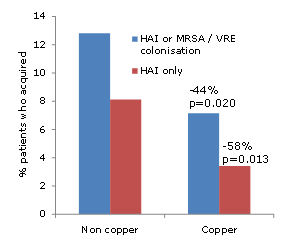 Figure: difference in acquisition rate between patients admitted to ‘copper’ or ‘non-copper’ rooms

The authors also make an interesting association between the degree of contamination in patient rooms and the risk of acquisition. However, since sampling was performed weekly regardless of a patient’s infection or colonization status, it is not possible to determine whether this association is causal or simply due to the fact that infected / colonized patients are likely to shed more bacteria into the hospital environment.

The study team should be commended for the careful design and attention to detail in the execution of the study. For example, they performed a daily census of the items in the study to determine exactly who was exposed to copper surfaces, and for how long. This indicated that only half of the patients in ‘copper’ rooms were exposed to all six copper items for the duration of their stay, and 13% of patients in the ‘non-copper’ arm were exposed to some copper items during their stay. It’s important to note that the analysis was performed on an ‘intention to treat’ population, i.e. all patients randomized to the two groups, regardless of which items they were actually exposed to. It would have been interesting to see a sub-analysis on the ‘per protocol’ population (i.e. those patients admitted to ‘copper’ rooms and exposed to all six copper items vs. those patients admitted to ‘non-copper’ rooms and exposed to no copper items). Also, I’m not sure why they chose to analysis % acquisition rather than a comparison of rates between the groups. And then there’s the salary support and grant funding to some authors (not directly related to this study) from the Copper Development Association. Notwithstanding these limitations, it does seem that the introduction of copper high-touch surfaces does reduce the transmission of hospital pathogens.

The degree to which contaminated surfaces contribute to the transmission of pathogens is up for debate. I was asked to give a talk at APIC 2012 on the role of the environment. Prior to the talk, I asked the expert faculty a question: ‘What is your estimation of the % of allC. difficile transmission in hospitals that is mediated, directly or indirectly, by contamination of the inanimate environment?’ The answers ranged from 25-75%, reflecting the uncertainty on this issue.

A recently published study by Johns Hopkins provides some illuminating findings (albeit indirectly). Extrapolating unadjusted acquisition rates from all study cohorts indicates that if rooms had been disinfected using hydrogen peroxide vapour (HPV) after every discharge, the overall rate of acquisition of MDROs would have been halved. Whilst it’s not feasible to disinfect all rooms using HPV at patient discharge, this does add some weight to the scale of the reduction identified in this copper study.

It seems that the introduction of a handful of copper alloy high-touch sites had a profound impact on HAI rates. On reflection, I do believe it possible that the scale of reduction in study is “real”. However, questions remain over the practicality and durability of the widespread adoption of copper alloy surfaces in healthcare.