Skip to content
HomeCounting the cost of CPE Mk II

Earlier this year, CMI published our article on the cost of a CPE outbreak in London, which cost 1.1m (Euros) over 10 months. EID have recently published a similar article, reporting a 0.6m (Euro) outbreak of CPE in the Netherlands.

The outbreak of NDM-producing K. pneumoniae occurred over 4 months in 2015, and included 29 patients. This was a typically Dutch ‘search and destroy’ approach to outbreak management: the discovery of a few epidemiologically-related cases on a surgical ward triggered screening of all inpatients in the 700 bed hospital! This identified 7 wards with 2 or more NDM carriers. A phenomenal 95% of the ~3000 patients identified as being ‘at risk’ (having spent time on one of the wards) were screened over the next 6 months. Interestingly, no risk factors (such as overseas travel) were identified in the 29 case patients (which is similar to our experience during the 2015 K. pneumoniae NDM outbreak). This suggests to me that a single undetected introduction of the outbreak strain was followed by horizontal spread within the hospital.

Figure 1: Counting the cost of the Dutch CPE outbreak (with my designation of actual expenditure and opportunity cost, not the authors’!) 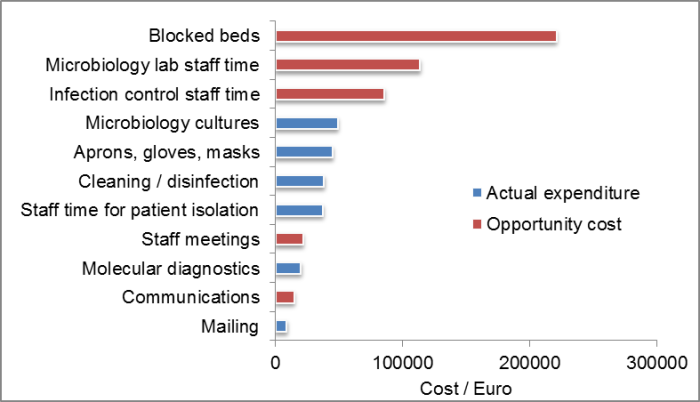 The team took a similar approach to counting the cost of the outbreak to us, listing everything that was done and adding a price tag to each line. The bottom line was a 0.6m Euro price tag over four months, accounting for 12% of the hospitals budget for clinical microbiology and infection control! The cost of around 23k Euro per patient was similar to ours (27k Euro per patient). A few discussion points:

Figure 2: Summary of studies evaluating the cost of outbreaks due to Gram-negative bacteria in hospitals. The cost of the outbreak is represented by the size of the bubble (aka the z axis).

Overall a helpful study which reinforces that even small outbreaks of antibiotic-resistant Gram-negative bacteria result in substantial costs to an organisation. I get the feeling that if the hospital hadn’t taken the measures that they did, they would be staring down the barrel of an endemic CPE problem (remember the 29 patients were spread over 7 wards in the hospital). Clearly, this argues for upfront investment in strong prevention activities rather than larger but later splurging of cash to control a problem after the horse has bolted!

2 thoughts on “Counting the cost of CPE Mk II”