Skip to content
HomeInferior but not non-inferior: How a Data Safety Board can kill a study

The old dogma to “always complete your antibiotic course” has been challenged recently, see BMJ and previous blogs. Is it safe to tell patients to stop whenever they feel better? Purely by coincidence this paper appeared, and was discussed in our PhD’s Journal Club. The paper’s title was Individualizing duration of antibiotic therapy in community-acquired pneumonia (CAP), and the students were surprised by the final result, reports Valentijn Schweitzer.

The study: A multicenter non-inferiority randomized controlled trial in which CAP patients that reached clinical stability within 5 days were randomized to standard care or a group in which antibiotics were stopped if patients were clinically stable (and if clinically stable for at least 48 hours).  A composite endpoint for failure (which included death) within 30 days was the primary outcome.

As part of protocol they also defined stopping criteria for safety, which were (1) inferiority of the individualized treatment arm or (2) proven harm for patients in both arms. Think a few seconds of the latter: how would you proceed in treating patients?

After randomizing 260 patients (125 with individualized treatment) the primary outcome (failure) was reached in 14 (11.4%) with individualized treatment and in 10 (7.4%) controls (p=0.20). On average, they had received antibiotics for 6 and 8 days (p<0.001). Yet, the Data Safety Monitoring Board (DSMB) decided to terminate the trial (that was planned for 950 patients) based on observed 30-day mortality (4 in individualized arm and I in control). Yet, according to the blinded adjudication  committee none of these casualties were related to CAP. Unclear how that knowledge contributed to the decision. Fun fact: many similar interventions are implemented as antibiotic stewardship without even assessing clinical outcomes.

Although the authors try to save their work by concluding that an “early stop might not be safe”, the students learned that stopping criteria for a DSMB should be better defined or your trial may not justify any conclusion. 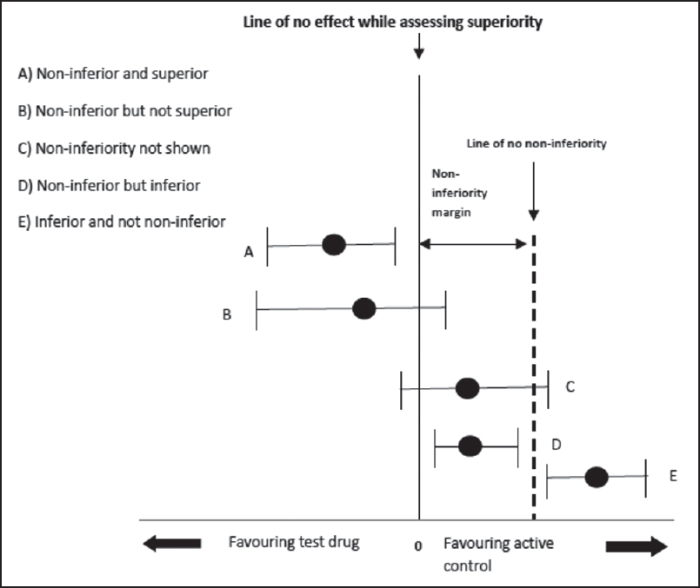 They needed this picture (that says more than a thousand words) of possible outcomes of a non-inferiority trial to end their discussion.