Skip to content
HomeSSI – It’s not what you do, but the way that you do it? 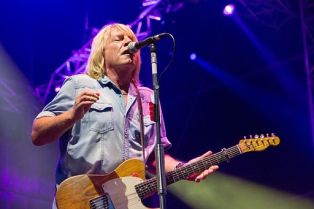 Another of my favourite guitarists succumbed to sepsis following surgery just before Xmas, with the sad passing of Rick Parfitt following shoulder surgery, spookily the day after his band Status quo performed their final electric gig (which I was at). The other was Rory Gallagher, who died a few years ago now of MRSA.  Surgical procedures are normally carried out under what should be the most controllable of conditions, yet there are variations in practice, a paucity of quality studies on even the most basic of interventions (such as pre-op bathing) and even when there is good evidence, it is ignored. However I do also wonder if we have been missing something. A paper that suggests no difference between Chlorhexidine (CHG) and Povidone Iodine (PI) for pre-surgical skin prep (both aqueous) recently piqued my interest. It was an RCT (non-blinded) undertaken in clean-contaminated upper gastrointestinal or hepatobiliary–pancreatic open surgery, however that wasn’t the aspect that I became interested in.In many countries, guidelines indicate that preoperative skin prep should be based in alcohol (adding a potential confounder to any study). This would undoubtedly assist with drying, however in this paper aqueous solutions were used and were allowed to ‘dry’ for three minutes before nurses then ‘dried the skin’ with a sterile towel. I do wonder about standard practice before the study as interestingly the pre-intervention SSI rate for the procedures under study for the three months previous was 15% (using PI), yet when implemented during the study it fell to 6.0%, perhaps as a result of using a pre-scrub prior to the skin prep (not described in the pre-study period). The rate for CHG was 5.6% for CHG, not different to the PI, but this wasn’t the part that interested me.

The authors described significant risk factors for SSI as the ‘usual suspects’ of age, diabetes mellitus, ASA grade, resected organ, duration of surgery and bilioenteric anastomosis with an additional factor of that I hadn’t seen often (with the exception of laparoscopic) of type of incision.

Age, biliary–pancreatic surgery and incision type (P =0⋅005) were the significant risk factors in multivariate analysis. The ‘inverted L’ incision had an odds ratio of 12.25 (p<0.001) over a midline incision. What influences the choice of incision? I have no idea, I’m not a surgeon, however maybe this is something that should be studied or included in surveillance when there is more than one accepted method of performing a procedure as there is some evidence that smaller incisions for the same procedures are associated with lower complication rates. The thought of wandering into surgery to lean over the shoulder of a surgeon and asking him if he has considered a midline incision as opposed to an inverted L isn’t an appealing one, however I do recall many surgeons advising me on the best way to take a blood culture, that hand hygiene isn’t evidence-based etc etc..