Skip to content
HomeChronic wound? No problem – a splash of oxygen peroxide should do the trick 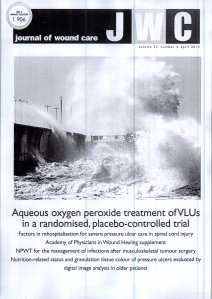 I was involved in a recently published RCT of a novel wound care system (‘BioxyQuell’), which trailed the application of an aqueous oxygen peroxide (AOP, aka aqueous ozone) lavage on venous leg ulcers. The study isn’t perfect, but the results are encouraging and should serve as a basis for further evaluations.

The RCT was performed in the community setting. Sixty-one patients were enrolled if they had chronic venous leg ulcers, and randomised to either 6 AOP treatments or sham placebo treatments with sterile water over 2 weeks. AOP and placebo arms were both treated with standard-of-care compression bandaging between treatments and for the duration of the study. Patients who completed the initial 8 week RCT were enrolled into a follow-up study evaluating wound healing at 12 weeks, 6 and 12 months. The key results are:

Figure 1: Wound healing in the AOP and placebo arm during the RCT (up to 8 weeks) and follow-up study (up to 12 months).

Figure 2: Patient withdrawals due to wound infection during the first 8 weeks of the RCT. 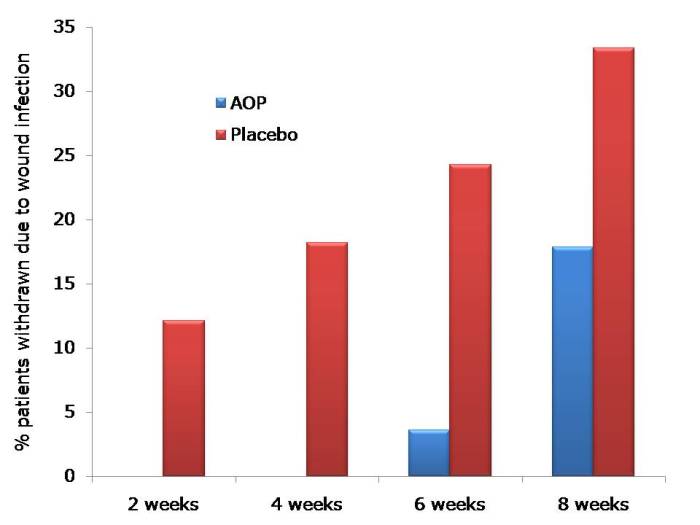 As ever, the study raises as many if not more questions than it answers:

This was a fair sized randomised, sham placebo controlled, double blinded study performed with tight inclusion and exclusion criteria in the community setting. This sort of RCT is surprisingly rare in the wound care literature. However, it was terminated early (due to lack of significant difference in wound healing and the fact that it took years to recruit a decent number of patients) and the primary outcome (wound healing at 8 weeks) was non-significant. Nonetheless, wound size, pain and bacterial contamination were reduced by AOP treatment, the long-term reductions in wound healing are tantalizing, and reduced withdrawals due to wound infection are tangible.

The statistician who formulated and executed the statistical analysis for this study, Carla White, sadly died (too young) during the latter stages of getting this article published. I am sorry not to have the opportunity to work with her again.

5 thoughts on “Chronic wound? No problem – a splash of oxygen peroxide should do the trick”