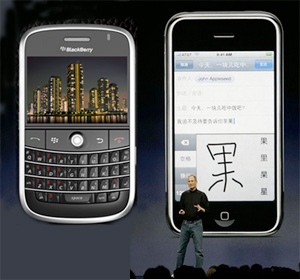 I own a blackberry and my wife owns an iphone. We often talk long into the night about the relative benefits of the phones, and the utility of the blackberry keypad compared with the touchscreen of the iphone is my strongest suit. However, a study from UCL in London provides evidence that the keypad of the blackberry is likely to be more contaminated than the touchscreen of the iphone. Sixty-seven phones were sampled, approximately half of which were touchscreen and the other half were keypad phones. Colony counts were significantly higher on keypad phones, which were also more likely to be contaminated with MRSA or VRE. Overall, 13% of the phones grew either MRSA or VRE, highlighting the potential importance of these sites in transmission.

So why the higher counts from the keypad phones? It seems likely that the nooks and crannies on the keypads allow for the buildup of dust and microbial contamination over time, and make the phones more difficult to clean.

It is unacceptable that 13% of mobile phones are contaminated with multidrug-resistant organisms such as MRSA and VRE. Appropriate disinfection policies are urgently required for these personal, mobile reservoirs of contamination.