A fantastic NEJM study by Mark Wilcox et al. brings monoclonal antibodies* to the party in preventing recurrent C. difficile infection. In this hugely impressive RCT (well, two squashed together actually), patients who received bezlotoxumab (a monoclonal antibody against C. difficile toxin B) were significantly less likely to suffer recurrent CDI (17% for bezlotoxumab vs 27% for placebo).

35% of patients suffer a recurrence of CDI – and are worse off second time around, with a higher chance of further recurrence and a poor outcome. People have been interested in monoclonal antibodies to ‘immunise’ patients in order to prevent CDI for years, with compelling data from animal models and initial human studies. Whilst this isn’t the first study to show that monoclonal antibodies reduce the risk of recurrent CDI, it is by far the best, including a gargantuan >2,500 patients from 322 sites in 30 countries!  The study evaluated four groups: bezlotoxumab alone (an antibody against C. difficile toxin B), actoxumab alone (an antibody against C. difficile toxin A), actoxumab plus bezlotoxumab, or placebo. Initial data suggested that actoxumab alone was more effective than placebo, and may have had some safety issues, so this arm was discontinued. All antibodies were given as a single dose during antibiotic therapy for patients with CDI. 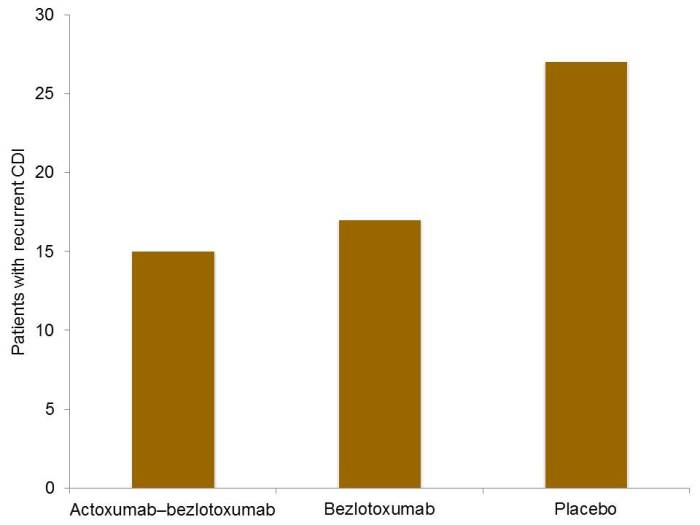 I was pleased to see that fidaxomycin was rare in the study, which has itself been associated with reduced recurrence, so could have confounded things. Indeed, there was no significant improvement in recurrence rate for patients who received antibodies when treated initially with fidaxomycin. There were also a couple of specific strains (including C. difficile 027) where a significant impact was not noted for bezlotoxumab alone. However, for both of these associations, the number of patients involved was relatively small, so this could be a powering issue.

I was interested to note that the clinical trials were funded, designed and results were analysed by Merck, the company who produced the antibodies tested in the study. Merck also appeared frequently in the authors individual COIs. I don’t have a problem with this – if anything, the study has probably had a heightened level of academic scrutiny. But it does introduce an interesting potential COI for discussion!

I guess the next step is to think about how this approach, which has now been shown to be effective clinically, fits in with other possible approaches in terms of comparative efficacy and cost-effectiveness. Although the studies were configured differently, the seminal van Nood study suggests an improvement in recurrent rate that is even greater than the monoclonal antibodies used in this study. And faeces is free**, whereas monoclonal antibiodies are not! On the other hand though, would you rather receive a single shot of monoclonal antibodies or somebody else’s faeces?!

Overall though, fantastic studies and suggests were should be looking very hard at monoclonal antibodies to prevent recurrent CDI. Finally, can somebody please come up with a more catchy name for these antibodies??

* It turns out I am not able to type ‘antibodies’ – my fingers automatically type ‘antibiodies’. Since antibodies are threatening their patch, perhaps antibiotics have antibodies to antibodies!

** Faeces tested and prepared for faecal transplantation is, of course, not free – but you take my point I hope!