Skip to content
HomeNeed to save some money? Then universal admission screening for CPE is for you!

Many guidelines now recommend screening some patients on admission for carriage of CPE. However, very few cost-effectiveness analyses have been performed. A Canadian group have just published a modelling study with a tantalising conclusion: universal admission screening for CPE is likely to be cost-effective, and may even be cost-saving!

The authors constructed a sensible-looking model to investigate transmission, costs, and outcomes associated with CPE in the context of universal screening. They evaluated the number of CPE colonisations / infections, quality-adjusted life years (QALYs), costs, and incremental cost-effectiveness ratio (ICER). You may have heard the adage that “you can’t put a price on life”. Well, you can in a mathematical modeller’s world: they used $100,000 per QALY as the threshold for cost-effectiveness in this study. Whilst this is in the range suggested by WHO, it is certainly on the high end, even for developed economies!

Marc Bonten described mathematical modellers recently as ‘contemporary artists’ – and there is indeed a degree of artistic licence in developing mathematical models. Since all models are wrong and only some are useful, clearly, the model contained key assumptions that can be challenged. Perhaps the most important assumption is that ‘Our model assumed a fixed basic reproductive rate [R0] for all individuals and that patients mix homogeneously in a hospital ward.’ Logically we know that this isn’t the case – a huge range of variables affect the “spreadability” of CPE from a patient: their level of mobility, site of infection or colonisation, whether or not they have diarrhoea, and on and on! Obviously, this heterogeneous risk would average out over a patient population, but very few patients would actually have the average basic R0! The authors used a base-case R0 of 2, meaning that each case of CPE would result in transmission to two other patients. Sensibility, the authors decided to vary the R0 from 0.5 to 3 to see what impact this made. The other key variable was the admission prevalence of CPE. This varies hugely – and I mean hugely – from virtually 0 to 20% or even more. The authors used a sensible range of 0.01–10% as a variable in the model. 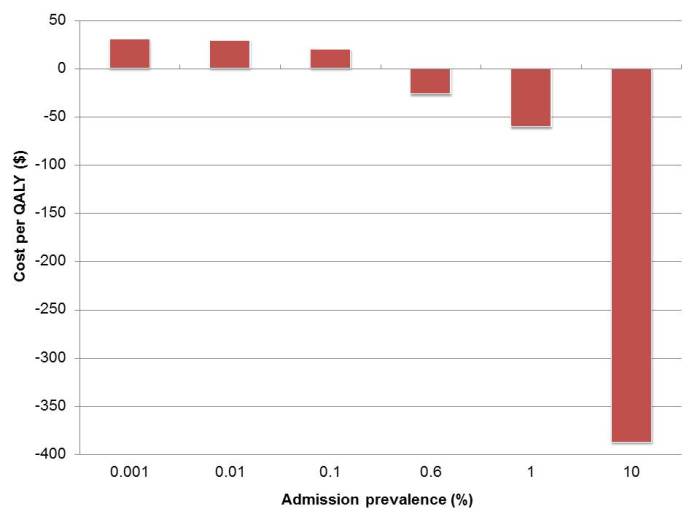 Figure: Illustration of how the cost per QALY associated with universal CPE admission screening varies with admission prevalence.

It’s a shame that the authors didn’t include the type of screening strategy as a variable in the model (e.g. universal vs. risk factor-based screening). It is all well and good to know that universal screening is cost-effective. But this study doesn’t tell us whether risk factor-based screening would be more cost-effective! We’ve been here before with MRSA. Initial cost-effectiveness analyses suggested that universal screening was the way to go, whereas subsequent work showed that it no longer was (perhaps due to reduced prevalence, or perhaps because it never was in the first place)! Related to this, it’s important not to underestimate the operational impact of risk factor-based screening. Universal screening is easier to implement operationally: because every patient needs to be screened, it is easier to embed in the patient pathway than a risk factor assessment, which may or may not result in a screen. Whilst the findings of this study are interesting and appealing in many ways, I’m not ready to jump on the universal CPE admission screening bandwagon just yet.

2 thoughts on “Need to save some money? Then universal admission screening for CPE is for you!”