Skip to content
HomeMolecular diagnostics for C. difficile infection: too much of a good thing? 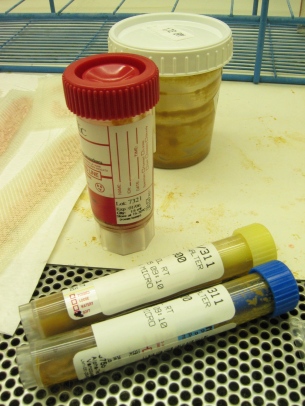 A study in JAMA Internal Medicine suggests that we may be ‘overdiagnosising’ C. difficile in this era of molecular diagnostics. The researchers from California grouped the 1416 patients tested for C. difficile into three groups: Tox+/PCR+ (9%), Tox-/PCR+ (11%), and Tox-/PCR+ (79%) (see Figure). Perhaps unsurprisingly, compared with Tox+/PCR+ cases, Tox-/PCR+ cases had lower bacterial load, less prior antibiotic exposure, less faecal inflammation, a shorter duration of diarrhoea, were less likely to suffer complications, and were less likely to die within 30 days. Perhaps even more importantly, patients with Tox-/PCR+ were pretty much identical to patients with Tox-/PCR- specimens in all of these metrics. In short: these patients had C. difficile in their gut, but they did not have C. difficile infection. The key message here is that we should not be treating patients who are C. difficile “positive” by molecular tests only. 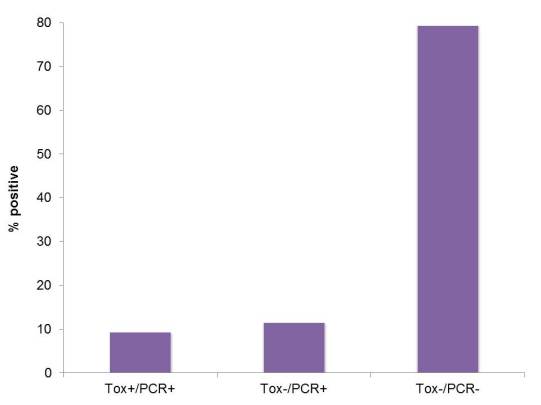 Figure: Percentage of 1416 specimens in each C. difficile category.

However, there’s a problem with relying on toxin enzyme immunoassays (EIA) (which are cheap and easy to do) because they lack sensitivity in detecting the C. difficile toxin. Although they vary in performance, sensitivity can be as low as 50%. Put another way, for every case of C. difficile you are detecting, you are missing another. But – thinking this through – this study suggests that the poor sensitivity of toxin EIA tests to detect the C. difficile toxin is not important clinically. If this was the case, then the Tox-/PCR+ group (of which 30% were actually toxin positive by a cell cytotoxicitiy assay) should be clinically different to the Tox-/PCR- cohort – but they were very similar in all measured metrics. Perhaps the level of toxin in the cases that toxin EIA tests miss is too low to be clinically relevant?

So, current UK advice to perform two step testing (a GDH EIA or toxin PCR, followed by a toxin EIA) still makes sense. But I’m left wondering: what’s the point of PCR for C. difficile toxin genes if it’s not clinically relevant in and of itself, and (as in the hospital in this study) is not being reported to the wards?